I’m writing a picture book that I know should work. But it’s not. Wouldn’t it violate child labor laws?
Wouldn’t the kid be in danger of getting burned?
Would a kid even WANT to be a cook? Why?
How old is this kid anyway?
Why is the kid even in this restaurant, so he gets hooked on cooking? Maybe, it’s his uncle’s restaurant and his parents work and he has to go over there after school and study.

Obviously, the adult audience for this story doesn’t connect. What about the kid audience?

At nine or ten, I was baking birthday cakes — from scratch — for my six brothers and sisters. One of the few dissenters in the group of critiquers says that her kids LOVE to make her coffee (Obviously, she lives in the great NW.) It just seems natural to me that a kid would want to cook! I’m convinced the story will work, if I can get around the adult objections.

And I do understand the objections. And I will address the objections. But it will mean starting from scratch and reconsidering both audiences for picture books, the adult and the child.

I decided to research. I’ve read through How I Learned to Cook, edited by Kimberly Witherspoon and Peter Meehan. This fascinating book is first-person accounts from some of the world’s greatest chefs on how they fell in love with cooking as a way of life. 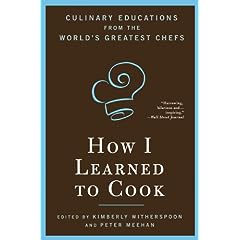 Many of the accounts are about a chef’s young adult years, or about some mistake s/he made during chef school or at a first job. But a couple were about falling in love with food and cooking at an early age. I’m also doing free-writes about why I liked cooking as a nine year old. And I’m reaffirming what is the heart of the story for me, remembering why I wanted to write this story.

A new draft will come. And it will be better.