Guest blogger, Joni Sensel writes about cutting her story so much that two books became one. I read an ARC of this new book and loved it — the novel revisions worked!

Why Cut Out Important Parts of a Novel? 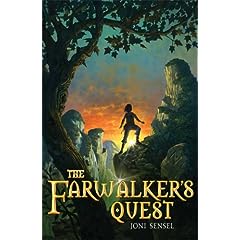 Originally I thought my new middle-grade adventure, THE FARWALKER’S QUEST, would be two books of a trilogy, in part because the first draft was 121,000 words.

Cut out 20,000 words. Nope. Among my agent’s earliest feedback was that I needed to combine the two halves, prop up sags, and try to get it under 100,000 words. Once I managed that, my editor wanted it trimmed even farther. The final book is just under 93,000 words. Though I wouldn’t have thought it possible when I started, I cut more than 20% from the original and upped the pace considerably. In the process, I learned to rely on several techniques that go beyond the standard advice to slash adverbs or use one perfect description rather than three. Even if you’re not as long-winded as I am, cutting virtually always increases pace, and few stories suffer from too fast a pace.

6 Techniques for Cutting a Novel’s Length