Why did he do that?

I have a full draft of a new novel and am starting on a revision. I think I’ve about worked out some of the factual issues and am now looking at character. A friend asks me, “Why?”

Character motivations are hard for me. The character does a particular action because that is who s/he IS. But that’s not enough for fiction. Readers want to know how the character got to this position, what they hope to accomplish with this action, how the action will impact the character and others around him/her. I’m looking at one action in particular, in fact, the central action of the story. My novel has a deep pre-story.

Pre-story. Anything that happened to the characters before the story starts.

Back-story. Anything that happened before the story starts that directly impacts the story.

These are slightly different concepts. In the pre-story, we could write a birth to story’s present biography of each character, a list of important life events. But backstory is the slice of those events that tells us more about the characters’ actions in this particular event of their lives.

In either case, from the character’s POV, it’s memoir. Ah, she says, maybe I can use that concept. I pulled out Natalie Goldberg’s book, Old Friend from Far Away: The Practice of Writing Memoir. 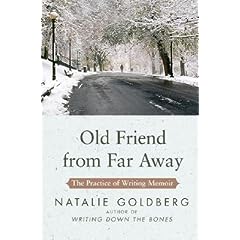 I’m asking each character to step up and write about one or more of the exercises on memoir. For example, one assignment is to write about ice cream. Character A explained that she loved eating ice cream until one cashier casually asked, “What have you done today to deserve this?”

Nothing, of course. She didn’t deserve it. In fact, quite the opposite, it was a consolation for a horrible day. It’s a start to understanding why she won’t splurge on any sweets. How does that affect the main action of the story? It doesn’t yet, but it gets me closer to character and I’m confident that a few more times of letting her remember previous events and I’ll be closer to knowing her motivations for this one.

It’s just freewriting stuff and mostly won’t go into the novel. It’s the messy, seemingly off track stuff that we often need to do before we can write the focused, purpose-filled scenes.