Early drafts of novels often open with an exciting situation only to devolve into a long explanation of back story. Donald Maass, in his

Writing the Breakout Novel and the 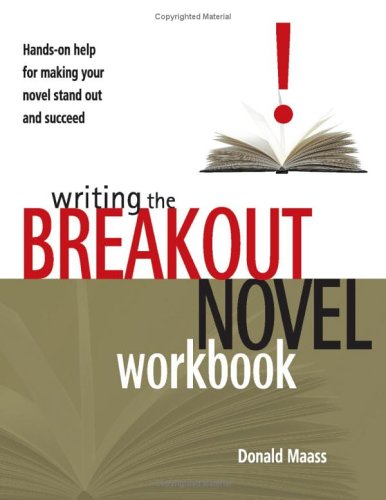 Writing the Breakout Novel Workbook, says to put back story somewhere after page 100.

Yes, everyone wants to argue with this, saying that the back story is necessary for the reader to understand what is happening.

Let’s distinguish between some terms. A story takes up a certain time and space.

The prehistory of the story would explain the general background of the time and place. For example, where does Mark Twain?s story, Huckleberry Finn fit into the history of the United States.

A personal biography explains where this story fits into the context of a character?s life and generally adds dimensions to the character.

Back story plants and sows seeds of conflict, that is, it is the background for the particular conflict this story tells about.

Generally, as an author, you need to know all three types of histories; but these histories find their way into stories in different ways. An historical fiction novel would emphasize the prehistory, or the general history of the time and place. A character story would emphasize the character?s personal biography. But all stories need some type of back story, something that explains the origins of the conflict, why these characters are struggling with this situation.

Where to Put Back Story

1. Avoid the First Chapter. I once had an editor compliment my novel because it avoided the pitfall of putting back story in the first chapter. First chapters–story openings–work best when there is a scene with an immediate conflict and the main character is working toward solving that problem. It’s often not the main problem that the character will face, so Maass calls this a “bridging conflict,” an immediate problem that will lead into the main conflict. In other words, your main character must want something in the first chapter, s/he must have an immediate goal. Put them into motion and let the reader get to know them.

2. Can I Put the Back Story in the Second Chapter? Maybe. It?s a better choice than the first chapter. But do you really need it? By now, you probably need bits of the prehistory of the situation: for fantasy, the tendency is to include lots of prehistory by this point of the story.

But think about Tolkein’s Lord of the Rings series. The hobbits don;t really understand the ring and its significance until they get to Elrond’s House, which is near the end of the first book.

Readers will stay with you if you keep immediate conflicts going; they will wait to understand everything. Personal biographies are often brought into the second chapter. This seems more natural, because from the character’s point-of-view, everything is filtered through their past experiences. The character might reminisce about a childhood incident to explain why they ask a certain question. In general, though, keep these short and relevant to the current thought, emotion or action.

If you find yourself putting a long explanation of prehistory, personal biography or back story in the first chapter–STOP IT! That’s the wrong place. (OK, someone is going to tell me about a book where this worked well–there are always exceptions!)

Move the prehistory, personal biography or back story to later in the story, as late into the story as possible for it to still impact the story. Preferably after page 100. Make it relate to and deepen the current scene. You’ll have a stronger story as a result.