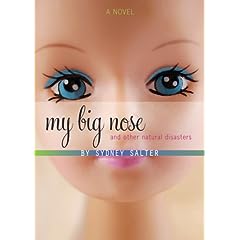 My Big Nose And Other Natural Disasters (HM Harcourt/Graphia, April 6, 2009).

Nasty chore. I used to think of novel revision as a nasty chore, kind of like laundry or washing dishes. I vividly remember taking my first manuscript to my writing group. I knew they would love it. This was my first novel, and it was going to be snapped up by a publisher, win many glorious awards for novels, and I’d become rich and famous—in mere months (okay, you can stop laughing now).

Imagine my shock when I returned the next week—and learned that they had suggestions. For improvement! They thought my novel started out kind of slow. They thought one thread of the novel was amore interesting than the other. Heart pounding, cheeks flushed, I defended myself mightily, explaining why I didn’t really need to take their suggestions, didn’t need to revise. They just didn’t get my novel. And maybe they weren’t quite as intelligent as I’d thought they were?

I submitted the novel. I collected rejections—mostly form letters. On the fifth form letter an editor scrawled, “Promising, but Kat’s voice could be stronger.” I focused on the promising part, not knowing how to revise to make the voice stronger. I simply didn’t have the writing skills to do that yet.

I wrote new novels. I attended conferences and workshops; I learned that nothing in book publishing takes mere months. And I learned to take criticism on my novels. Sure my heart still pounded, my cheeks still flushed, but I took extensive notes and asked clarifying questions. I stopped defending myself and my book. I really listened to critiques.

I actually looked forward to using the advice to improve my novels. Was this [whispers] revision?

I wrote my fourth book during National Novel Writing Month, but before revising it, I decided to return to that first story. I finally understood voice. I even took another look at those initial revision comments made by my writing group. How I loved returning to those familiar characters! I finally knew how to make the book better.

My fourth novel, My Big Nose And Other Natural Disasters, caught an agent’s attention. But he had a few notes for revision. No problem—my patient (and did I mention intelligent?) writing group had taught me how to take criticism! I worked hard on the revisions.

Sale #1. And the book sold quickly.

Sale #2! A few months—and revisions—later, my agent also sold that very first novel, Jungle Crossing, but only because I had learned to appreciate, okay, maybe even love, revising. Now if only I could learn to love laundry and dishwashing . . .