Rosanne Parry, debuts with Heart of a Shepherd 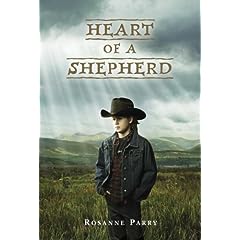 When I sold my first novel, Heart of a Shepherd, I had no idea what to expect from revision. I could go on and on about the process, but I’ll just focus on one element.

Cattle branding is a yearly event on a ranch. My main character has a long conversation with his older brothers about the branding. My editor suggested that instead of having them talk about branding, they should just do it. It’s a reasonable request, but I knew instinctively that scene wouldn’t work. At first I thought I’d just ignore my editor’s request. He did say the revisions were my choice and I should not take advice that wouldn’t help the story. Still, it bugged me that I couldn’t give a concrete reason for not changing that scene.

So I wrote the scene and now I know why it won’t work—too many people. It takes 10 to 15 people to do all the jobs involved in a branding which include, in addition to applying the brand, tagging the calf’s ear, vaccinations, and castration for the young bulls. It’s too many characters to write and the action occurs very quickly (about 30 seconds to do all four of those things to one animal.) It was impossible to write a clear scene in less than several thousand words.

And then there was the matter of the rocky mountain oysters, as the left over animal parts are called. Many people cook them and eat them as a snack throughout the branding day. Others let the dogs eat them up raw.

It’s not that I objected to describing that practice—it’s a natural part of ranch life. However, it seemed a bit out of step with the general tone of the manuscript which made me wonder why my editor wanted it there. I learned after the book came out that my editor had never heard of rocky mountain oysters, and had no idea about the gustatory customs of branding. He was shocked! A little communication from me a little earlier might have been a good idea.

Things things worked out, anyway. Although I never used the branding scene, I did like the blood and guts elements of it, so I wrote a scene about birthing a calf. There was a better arc to the calving scene and it only had four characters plus the heifer and calf—much easier to write clearly. My editor and I are both happy with leaving the conversation about branding as it was originally and adding the calving scene. But I doubt I’d have written that scene if I hadn’t been willing to write a scene I knew I’d throw away first.

Support the Class of 2k9!
Order Now from Amazon: HEART OF A SHEPHERD by Rosanne Parry

OR Visit the Class of 2k9 Website for the latest updates.